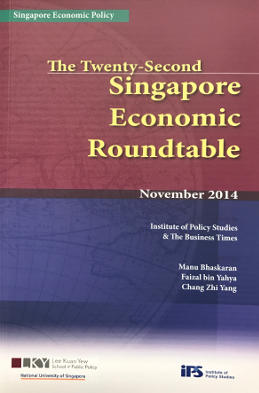 The 22nd Singapore Economic Roundtable (SER) was held in November 2014. The Institute of Policy Studies has been convening the SER since 2003. Our first goal is to provide a forum for assessing current economic conditions and how cyclical monetary and fiscal policies should be adjusted. A second aim is to conduct a deep dive into a selected issue of structural nature that was likely to affect Singapore and to determine how policy should respond to such a challenge.

The first session of the 22nd SER addressed cyclical issues. In essence, the discussion found that the global economy was recovering and providing better conditions for Singapore to grow. Overall, the discussion suggested that Singapore was in a fairly good position in the economic cycle and that the main policy concerns should be on structural considerations such as the need to boost productivity, partly through capital deepening but more and more through improving human capital.

The focus of policy not just in Singapore but in much of the global economy was three-fold. First, while global growth had recovered, headwinds remain strong; thus, policies were needed to achieve growth and create the jobs needed for prosperity and social harmony. Singapore was in a good position in this context as it had the policy space to use monetary and fiscal tools to contain such risks. Second, the crisis had taught us that increasing global financial linkages made for a degree of financial volatility, requiring carefully calibrated monetary policy complemented by macro-prudential measures. The increasing financialization of the Singapore economy could have raised risks for Singapore, which merited careful policy attention as the economy was likely to be subject to more boom and bust cycles. Finally, there was a need for much greater policy coordination at the international level.

The second session of the SER looked at the issue of creating a sustainable model for public goods. Such a model had to balance among objectives such as cost effectiveness, quality and equity. Given the constant changes in the economy and society, no model remains optimal for long, and policymakers need to review the models regularly and adapt to changes. Singapore had a good healthcare system, with low costs and good outcomes. In the area of public transportation, the observation was that Singapore had yet to achieve an optimal model, but with the pragmatic approach the government had been adopting, a better model was emerging over time.