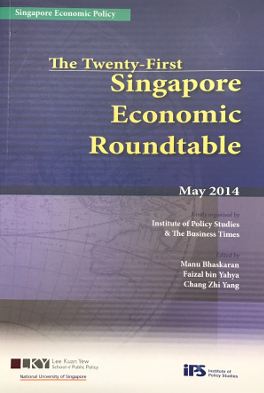 The Twenty-First Singapore Economic Roundtable (SER) was held in May 2014. The SER is convened by the Institute of Policy Studies with two aims. First, to assess the prospects of cyclical monetary and fiscal policies given the state of the macro-economy. Second, each SER also analyses a structural challenge facing Singapore with a view to understanding what policy changes might be needed to resolve such a challenge. The Twenty-First SER was held at a time when global economic conditions were improving, with the G3 economies recovering and Singapore’s ASEAN hinterland also set to regain momentum. However, participants were concerned about the domestic headwinds that might constrain economic growth. In particular, higher labour costs arising from the policy-induced tightening of foreign labour inflows would hurt profitability and growth prospects: weak productivity growth combined with rising wages meant that unit labour costs were rising.

Where higher unit labour costs were a risk to inflation in the near term, participants were concerned by the medium to long term risk disinflationary pressures. The correction in the real estate sector was one risk factor. Another risk was that the ASEAN Economic Community’s trade opening would bring about a cheap labour shock akin to that caused by China when it acceded to the World Trade Organization. As in previous Roundtables, the appropriateness of the exchange rate-based approach to managing monetary policy came under scrutiny. However, the view of most participants was that such an approach in combination with macro-prudential policies remained the most optimal among the policy options that Singapore had.

With regards to structural challenges, Singapore had done well in recent years as a result of government policies to accelerate innovation in Singapore, with notable improvements in the development of a start-up scene in Singapore. Generous grants and the introduction of more funding mechanisms had encouraged talented individuals to start companies. Thus, the Government has successfully encouraged the formation of more companies. However, Singapore faces some fundamental disadvantages stemming from its high cost living environment, lack of scale and inadequate development of the financing of innovations.

It was therefore timely for the government to review some of its approaches to innovation so that Singapore could progress further in innovation-led growth. New funding mechanisms could be considered such as crowd-funding. Local corporations and wealthy family businesses have considerable resources and market connectivity to add value to start-ups and policies could be devised to incentivise them to contribute more to funding or developing innovation in Singapore.