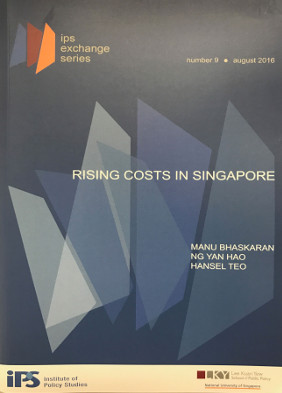 In this report, it is seen that a confluence of demand-side and supply side factors arose to generate inflation in Singapore. High rates of population growth were a primary driver that led to shortfalls in housing supply. The supply demand imbalance accelerated home prices and construction activity. This led to overheating in the construction sector, which spilled over to the real economy given the strong output multipliers and backward linkages in the sector.

In addition, global liquidity inflows as well as the liberalisation or privatisation of HDB resale, retail and industrial markets contributed to the acceleration of asset prices and rents. This in turn led to high growth in private household credit and property prices, and a feedback loop of rising credit and prices were averted through successive macroprudential polities and cooling measures.

The high cost economy marks a shift towards a higher value added economy; but this has created a distribution of wealth towards the asset rich. High inflation in the context of stagnating productivity and wages – driven in part by high rates of immigration of low skilled workers from 2006-2012 – has led to major distributional impacts on the poorest in society, which have not yet been fully explored in a detailed study.

In sum, inflation over the period was driven mainly by accelerating population growth – which overburdened existing infrastructure – and rising land use costs caused by global liquidity, supply-demand imbalances and institutional shifts in ownership and management of key resources. Other contributory factors included rising commodity prices, and in particular energy prices, which increase the costs of doing business.

Based on our studies, several areas of concern for further discussion and research have been raised. These include the optimal level of public ownership of commercial spaces; the role of economies of scale and market structure in firm mark-ups, particularly in the case of dominant firms in a localised market; and the use of cost-function analysis to assess the dynamics of input substitution in relation to changing business cost structures.