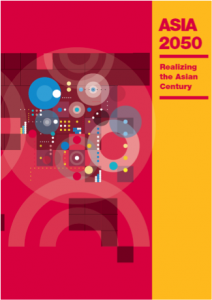 Asia is in the midst of a truly historic transformation. If it continues to grow on its recent trajectory, it could, by 2050, account for more than half of global GDP, trade and investment, and enjoy widespread affluence. Its per capita income could rise six-fold. It thus holds the promise of making some 4 billion Asians, hitherto commonly associated with poverty and deprivation, affluent by today’s standards. By nearly doubling its share of global GDP (from 27 percent in 2010 to 51 percent by 2050), Asia would regain the dominant global economic position it held some 250 years ago, before the Industrial Revolution. Some have called this possibility the “Asian Century”.
This promising outcome, premised on the major economies sustaining the present growth trajectory, is plausible, but it does not imply that the path ahead is just doing more of the same. Indeed, just maintaining the present growth rates will require urgently tackling a broad array of politically difficult issues over a long and sustained period, even though benefits may not be obvious in the near term. Asia’s rise is by no means preordained.

A distinguishing feature of Asia’s economic story during the past fifty years has been the singular focus of most policy makers and political leaders on domestic economic and social development. This was appropriate as countries attempted to eradicate poverty and rapidly catch up with the developed countries. It was also possible to do so when Asia’s global footprint was smaller.

But as the center of gravity of the world economy moves to Asia, culminating in its share of global GDP rising to half or more, it will no longer be possible or desirable. It is therefore important that Asian policy makers look beyond their national borders. Managing some of the biggest risks facing the region—particularly, cross-country disparities that could lead to conflict—will require region-wide discussion and action.

In this Asian Development Bank- commissioned book, Centennial Group presents a strategic framework and the contours of general strategies for Asia as a whole, covering three dimensions: national action; regional cooperation; and collective action on the global agenda.

The book was released at an Emerging Markets Forum Seminar, funded by the Japan Bank for International Cooperation (JBIC), in August 2011 in Tokyo.

The book is available in Mandarin and Korean; Hindi and Russian translations are under consideration. Online purchase at http://www.sagepub.com/books/Book237881