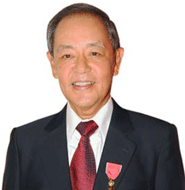 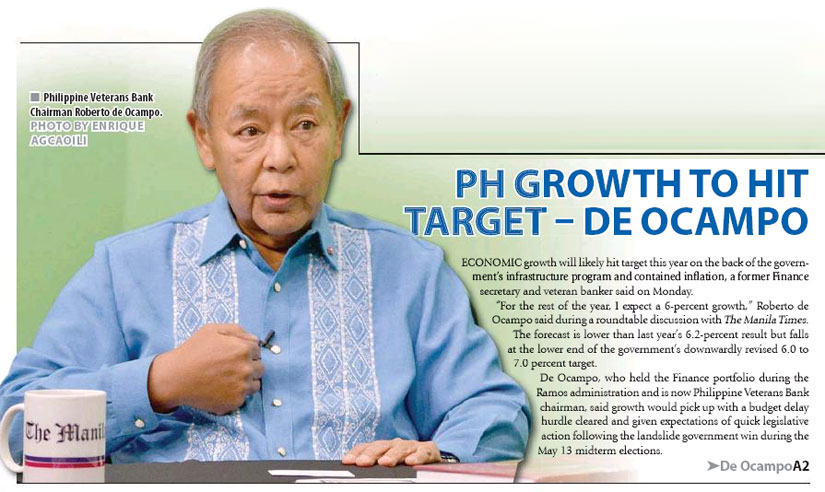 ECONOMIC growth will likely hit target this year on the back of the government’s infrastructure program and contained inflation, a former Finance secretary and veteran banker said on Monday.

“For the rest of the year, I expect a 6-percent growth,” Roberto de Ocampo said during a roundtable discussion with The Manila Times. The forecast is lower than last year’s 6.2-percent result but falls at the lower end of the government’s downwardly revised 6.0 to 7.0 percent target.

De Ocampo, who held the Finance portfolio during the Ramos administration and is now Philippine Veterans Bank chairman, said growth would pick up with a budget delay hurdle cleared and given expectations of quick legislative action following the landslide government win during the May 13 midterm elections.

“One of the major reasons for having the economy growth slowed down over the first quarter of this year is because it took a long time debating the budget And therefore we’re not able to pour enough funds into the economy to continue a very vigorous implementation of Build, Build, Build [infrastructure program],” he recalled.

A dispute between the Senate and the House of Representatives over alleged insertions resulted in a four-and-a-half-month delay before legislators finally agreed to approve the 2019 outlay.

The government was forced to operate on last year’s budget, unable to spend on projects and programs supposed to be implemented this year, which resulted in first quarter gross domestic product growth hitting a lower-than-expected 5.6 percent.

“The midterm elections showed overwhelming vote for the President’s program and his vision of where the country would go,” de Ocampo added.” So I think that with the Congress and the Senate much more on the President’s side, the possibility of keeping the budget on a dribbling basis is going to be minimized.”

President Rodrigo Duterte, he noted, now has the advantage of having the support of Congress, the Executive and the Judiciary – a rare opportunity to implement programs that would lead to growth. Further supporting improved prospects for the rest of the year, meanwhile, is much lower inflation that de Ocampo expects to also fall within the 2.0 to 4.0 percent target at not more than 3.0 percent this year.

He pointed out that the high rice and fuel prices that drove inflation to as high as 6.7 percent last year are not expected to recur given initiatives such as the removal of quantitative restrictions on imports of the grain.

“The passage of a rice tariffication law would stabilize the methods by which we import rice and supplement our domestic production in a manner that would ensure much greater price stability,” he explained.

Headline inflation eased to a 16-month low of 3.0 percent in April, bringing the year-to-date rate to 3.6 percent.

The former Finance chief also sees more opportunities for the Philippines given the likelihood of Brexit and US-China trade war. “I expect foreign investments to be quite vigorous. Already, you see the Japanese are pouring funds into the country and they are not the only ones. The Chinese are doing the same,” he said.

“Right now, really the place to look at is Asia. And my other fearless forecast is that it’s likely to be [an] Asian Century. And if we play our cards right, we will be positioned quite well in the middle of this growing Asian economic boom,” he added.

Net foreign direct investment inflows were up 52.6 percent to $1.493 billion in the first two months of the year based on the latest official data.