How will Southeast Asia’s economies respond to the pandemic?

Centennial Asia > Resources > Press/Events > How will Southeast Asia’s economies respond to the pandemic?
No Comments 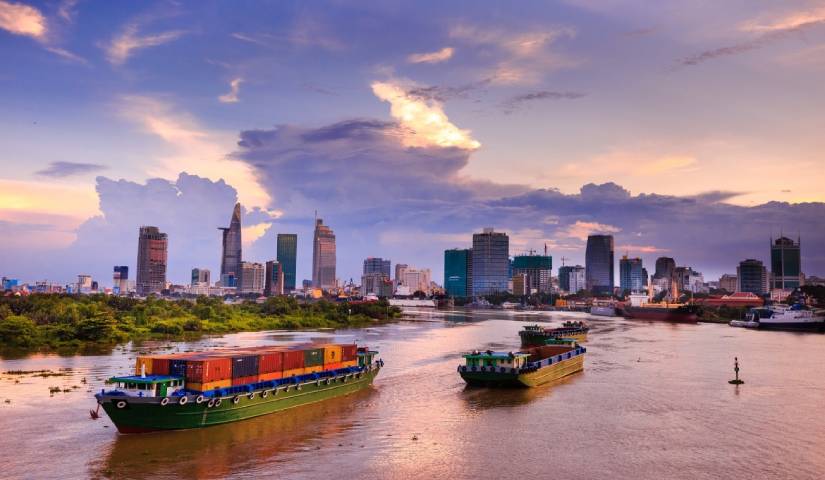 Cargo is seen moving towards Ho Chi Minh City in Vietnam. While Vietnam has done well in managing the pandemic, it is not immune to the impacts of the virus that are global in nature. Photo by Quang Nguyen vinh from Pixabay.

Southeast Asia’s economic fortunes have been hit hard owing to the pandemic, not unlike economies in other parts of the world. Singapore, Malaysia, Indonesia and the Philippines have all seen either record quarterly growth contractions in the second quarter of 2020, or their first quarterly contraction in years; and Thailand is expected to see the same.

Unravel spoke with Manu Bhaskaran, one of the region’s leading economists and founding director and chief executive officer of Centennial Asia Advisors, about how Southeast Asian economies are coping with their first real challenge since the Asian Financial Crisis more than two decades ago. He also touched upon how the region’s economies can bounce back, economic trends we are likely to see post-pandemic, and the question of a larger role of the state in socio-economic development.

Unravel: Are we starting to see the US-China trade war impact Southeast Asia? Which are the likely beneficiary countries, and which will be badly hit?

Manu Bhaskaran: The trade war affects Southeast Asia in several ways. First, the uncertainty it created hurt business confidence and investment, resulting in slower growth even before the pandemic. Second, we have seen more production relocation out of China, with Vietnam being the biggest beneficiary. And lastly, the fear of protectionism has encouraged Southeast Asians to step up efforts to promote trade – the push for the Comprehensive and Progressive Agreement for Trans-Pacific Partnership (CPTPP), the Regional Comprehensive Economic Partnership (RCEP) and other trade-related initiatives are the products of that.

Unravel: What are some of the key ways businesses in the region are responding to the slowdown?

Mr Bhaskaran: Many businesses have been hit badly and there remains a great amount of uncertainty at the moment. Therefore, for businesses right now, it is a question of survival and cutting costs, and about hoarding cash and being mindful of expenditures until there is greater clarity.

Unravel: Broadly speaking, what are some economic trends you expect to see following the pandemic? For example, governments looking to reshore, a focus on social infrastructure, or any other changes to their economic models…

Mr Bhaskaran: There will be more focus on resilience – this will include building buffers of savings in the state to fund sudden needs for policy support, improving pandemic preparations, and improving infrastructure such as for healthcare and the like.

In terms of the impact it will have on economic models, it is far too early to tell. We have seen governments such as China, Singapore, South Korea set up committees to start planning for the future, but concrete plans will have to wait till there is more clarity.

One of the changes will almost certainly be a greater keenness on the part of some governments to reshore production of strategic items such as pharmaceuticals, medical equipment and defence-related items back to their home turf. We are likely to see more measures put in place to ensure this.

Unravel: Do you think we will see greater tolerance for a larger role of the state in the region’s economies following the pandemic?

Mr Bhaskaran: Clearly, what is needed for resilience involves the state – only the state can really take the lead on healthcare, preventative policies and the like. And again, only the state can come up with the kind of massive stimulus programmes that we have seen, to keep an economy running. There is no alternative to it.

Therefore, I think there is a realisation everywhere that the role of the state needs to expand.

I think there is a realisation everywhere that the role of the state needs to expand. There is no alternative to it.

Unravel: How can poorer regional economies deal with the fiscal strain resulting from the pandemic?

Mr Bhaskaran: So long as economic growth can resume, then a few years of fiscal restraint can bring the public debt/GDP ratio in the regional economies down substantially. Recall that Indonesia had a public debt/GDP ratio of around 100% after the Asian Financial Crisis, but brought that down to under 30% a few years ago. So, the key is to maintain growth and stick to a measure of fiscal discipline.

Unravel: Indonesia’s economy contracted in Q2 for the first time in two decades. In what ways is the government responding to the crisis from a socio-economic perspective?

Mr Bhaskaran: Bank Indonesia has cut interest rates and fiscal spending has been stepped up to spur economic activity. The government has tried a balanced approach to the public health crisis so far, imposing restrictions on movement but doing so selectively because it also wants to limit the damage to people’s livelihoods while managing public health.

The government needs to improve the disbursement of budgeted spending – the data shows that planned spending is not actually being implemented speedily, thus weakening the efforts at stimulus. Policymakers are also pushing ahead with potentially game-changing labour market reforms – if these are passed by parliament by September as planned, these reforms will greatly boost investment and growth.

Unravel: Vietnam has arguably handled the coronavirus pandemic better than all other ASEAN nations. Do you think this is going to also reflect in its economic performance in the coming quarters?

Mr Bhaskaran: Vietnam has done well in managing the pandemic, so its domestic economy is likely to remain resilient. However, Vietnam relies a lot on exports (with the exports of goods and services at 107% of GDP in 2019), and if global demand continues to remain lacklustre, then its economy will be hurt too.

Separately, Vietnam’s economy also depends on tourism and that too has almost stopped. Therefore, while Vietnam’s economy can perform relatively better than its peers’, it is not immune to the effects of the pandemic that are global in nature.

Unravel: And finally, how do you think Southeast Asian countries are going to react to initiatives such as the Belt & Road Initiative, in light of recent developments around China?

I think Southeast Asian nations are open-minded and will approach relations with China—including the Belt & Road Initiative – in a pragmatic manner.